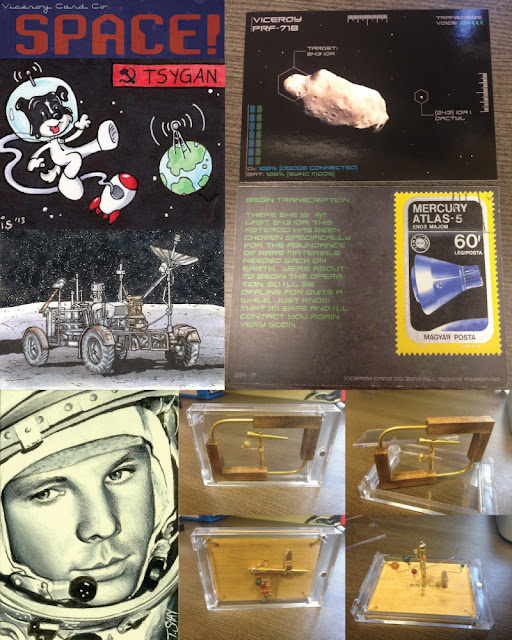 1 - Can you tell us a little about yourself, your official title and what you do at Viceroy Cards?

2 - How long did you collect sketch cards before starting Viceroy Cards?

3 - How many people officially make up the Viceroy Cards company and how did it get started?

5 - Your first set Cryptids was an unlicensed set that did extremely well. What were your expectations for it?

6 - What did you learn as a company from your experience with Cryptids? Are you surprised at how well it did?

7 - With your upcoming Space set, you created miniature sculptures that fit into a trading card holder. Who came up with that idea and how long did it take to create your first successful sculpture?

8 - Unlike other companies who generally pay artists a few months after a set release date, Viceroy policy is to pay artists as soon as they turn in their assignment. You obviously must have a lot of faith in your sets to do this. Why stray from the normal card company payment formula?

9 - Viceroy also print its own cards using a vintage letterpress machine. What made you decide to do that?

10 - You have several more sets based of unlicensed properties (Space, The Deep, Carnival, Insecta, and Cryptids 2) Do you plan to produce licensed property sets as well?

11 - The themes from your sets has been "outside the box" so to speak but yet it has been pretty successful thus far. Did you plan to intentionally avoid the "mainstream" themes of superheroes, or cheesecake pin ups for your sets? Or will you eventually do some superhero or pin up themes later on?

12 - Can we expect to see some licensed property set in the future?

13- Do you see sketch cards in a different way since you now produce sets for them? Do you still collect sketch cards?

14 - Will Viceroy be making any convention appearances this year?

15 - Where can people go to if they would like to learn more about Viceroy or to purchase cards?

Lak Lim
I am a freelance artist and I have worked in the sketch card field since 2008. On November 19, 2010, I created the Sketch Card Fanatics group on Facebook. The group is dedicated to helping anyone who is interested in learning more about sketch cards.